The following informational items provide an overview of pension and OPEB unfunded liability issues, including additional links for further exploration.  The Town of Los Gatos is committed to providing information access and transparency on these and other issues.  The community is encouraged to sign up for “Notify Me” to subscribe to the items of interest (such as upcoming Town Council, Council Finance Committee, and other Commission meetings):  www.losgatosca.gov/list.aspx.

You can find information on the following pension and OPEB related areas below:

The Town of Los Gatos provides a defined benefit pension plan for all full-time employees and some part-time benefitted employees as part of their total compensation package.  Defined benefit plans provide a fixed, pre-established benefit payment for employees in retirement based on a formula which takes into account an employee’s years of service and highest average annual salary.  The defined benefit pension has been a standard part of compensation in governmental organizations and in Los Gatos is in lieu of participating in Social Security, except for the required Medicare rate of 1.45% of all wages.

The Town’s pension plans are administered by the Board of Administration of the California Public Employees’ Retirement System (CalPERS).  The Board of Administration is responsible for the management and control of CalPERS.  In addition, the Board has exclusive control of the administration and investment of funds.  Sworn employees are covered under the Safety Plan which is a pooled plan, while all other employees are covered in the Miscellaneous Plan, which is a separate plan.  The Miscellaneous Plan is administered by CalPERS in the Public Employees’ Retirement Fund (PERF).  In addition, the Town Council has established an Internal Revenue Code Section 115 Trust as a supplement to the PERF fund.  The Town’s Pension 115 Trust is administered by the Town Pension and OPEB Trusts Oversight Committee.  The Pension 115 Trust assets are maintained by the CalPERS California Employers' Pension Prefunding Trust (CEPPT).

The Town also provides a healthcare benefit for all eligible employees.  The healthcare plan pays all, or a portion of, health insurance premiums for qualified retirees and their survivors and dependents.  Healthcare benefits are also referred to as Other Post-Employment Benefits or OPEB.  The Town’s healthcare plan is an Internal Revenue Code Section 115 Trust which is administered by the Town Pension and OPEB Trusts Oversight Committee. The Oversight Committee is responsible for the management and control of the healthcare assets.  The healthcare assets are maintained at CalPERS and invested in the CalPERS managed California Employers’ Retiree Benefit Trust (CERBT) Strategy 1.

For more information on CalPERS and PERF, please refer to: https://www.calpers.ca.gov/page/home

For more information on CalPERS CERBT Strategy 1, please refer to:

For more information on CalPERS CEPPT, please refer to:

For more information about the pension and other benefits offered to Town employees, see:

In order for the Town to understand the value of future pension and healthcare benefit payments, an actuarial valuation is performed each year for the pension plan and every other year for the healthcare plan.  The CalPERS actuary estimates the payments that will be made for all potential retirees from the plan in each future year.  The actuary calculates the present value of future benefits the plan will be required to pay to its current participants: those still working who will retire in the future, retirees, and those who have terminated employment but have not yet begun drawing benefits. For the healthcare plan, the Town Pension and OPEB Trusts Oversight Committee retain the services of Bartel and Associates to analyze the respective assets and liabilities of the Healthcare Plan.

Although an estimate, considering these payments as a certain stream of future cash flows is helpful to understand the pension and healthcare obligations.  Expressing the value of these future series of payments as single amounts on a specific date annually is useful for several purposes, including financial statement preparation, annual funding decisions, and regulatory compliance.  This single amount is referred to as the Actuarial Accrued Liability (AAL) and is an estimate of the present value of the benefit obligation.  To calculate the present value of the obligation, the actuary uses a discount rate which is the interest rate used to bring future cash flows to the present to account for the time value of money.

For more information on the Town’s actuarial valuations and pension and healthcare obligations, see:

What is the Discount Rate?

As previously noted, the discount rate is the long-term interest rate used in determining funding for future pension and healthcare benefits.  The discount rate is also known as the assumed rate of return because it is the expected return on investments during the fiscal year.  State and local government plans, multiemployer plans, and some private sector plans not subject to the Pension Protection Act funding rules commonly use expected return-based methods.  Using an expected return-based method, a discount rate is selected by looking at the asset allocation of the pension plan investment portfolio and estimating the average return the portfolio is expected to produce during the time period in which benefits are paid.

For more information on the expected-return based method, see:

How does the Town Fund the Pension and OPEB Plans?

(Left Side = Right Side)

The balance of the funding is earnings from the investment of plan assets. Both plans currently invest in a range of assets including stocks, bonds, real estate, and other investment vehicles.  Over the past 20 years ending June 30, 2019, for every dollar CalPERS pays in pensions 58 cents comes from investment earnings, 29 cents from employer contributions, and 13 cents from employee contributions.

For more information about the Town and employee contribution rates see:

For more information regarding CalPERS investments, assets, and earnings, see:

For more information on the Town’s actuarial valuations and pension assets, see:

What is the Unfunded Accrued Liability?

The Unfunded Accrued Liability (UAL) obligation represents the market value of the assets minus the discounted value of the future liabilities.  When a plan or pool’s Market Value of Assets is less than the Actuarial Accrued Liability, the difference is the plan or pool’s UAL.  An unfunded liability results in the Town paying contributions in excess of the normal cost or the employer Unfunded Accrued Liability (UAL) annual contribution amount.  The pension UAL is amortized over a period of time based on CalPERS amortization policies.  The Town’s annual UAL contribution payment calculated by CalPERS is designed to pay down the UAL principal and interest over that amortization period (currently 30 years). The Town Pension and OPEB Trusts Oversight Committee in consultation with their actuary determines the amortization period for the healthcare UAL (currently 18 years for the 2019 valuation).

For more information on the Town’s UAL and amortization, see:

What Caused these Unfunded Obligations?

The Town’s pension plans over the past several decades, like all other CalPERS participants, have experienced unfavorable investment returns, changes in actuarial assumptions, and unfavorable demographic shifts which have outweighed any positive plan experiences.  The table below provides the preliminary PERF investment returns for the 12 month period that ended June 30, 2019, five years, ten years, twenty years, and since inception.

As the CalPERS chart below illustrates, over the last several decades pension plans have shifted their asset allocations toward greater equity and other asset class exposures as risk free rates of return (10 Year Treasury) steadily declined.  However, the greater volatility associated with equities was evident during the 2001 and 2007 recessions as market declines impacted pension plan funding. The subsequent pension plan investment losses from those two recessions are still one of the contributing factors to the Towns current pension UAL. 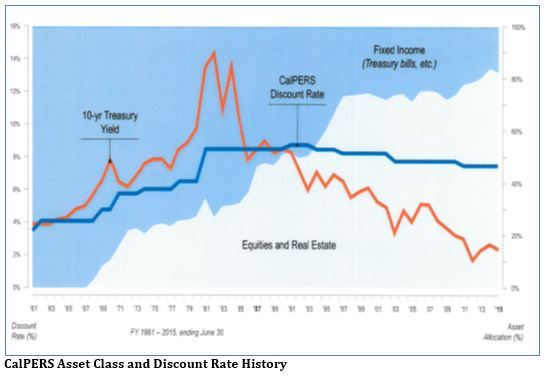 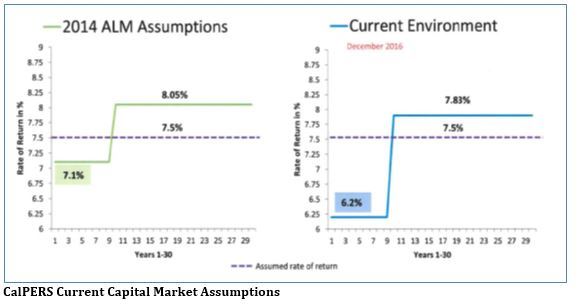 Since 2004 CalPERS has lowered the Discount Rate from 8.25% to the current 7.0%.  These reductions have also significantly contributed to the UAL.  The following data from the Town’s 2019 pension actuarial valuations help illustrate the sensitivity of changes in the discount rate to the UAL.

In June 2004, GASB issued Statement No. 45, Accounting and Financial Reporting by Employers for Post-Employment Benefits Other Than Pensions (“GASB 45”), which addresses how state and local governments should account for and report their costs and obligations related to OPEB.  GASB 45 generally requires that employers account for and report the annual cost of OPEB and the outstanding obligations and commitments related to OPEB in essentially the same manner as they currently do for pensions.  With the implementation of GASB 45, the Town started calculating and recording the OPEB obligation which resulted in the initial healthcare plan UAL.  The provisions of GASB 45 allowed implementation to be applied prospectively and did not require governments to fund their OPEB plans.

In 2009, the Town proactively opted to transition from a “pay-as-you-go” funding policy for OPEB benefits and adopted a ten year phase-in approach to prefunding the OPEB obligations. Since implementation of the ten year phase in to prefunding the healthcare plan has gone from zero percent funded to the current 67.9% funding ratio.

For more information on the Town’s pension and OPEB UAL, see:

What has the Town Done to Address the Unfunded Obligation?

The Town prudently recognized the potential impacts to future service delivery if unfunded pension and OPEB obligations were not addressed and additional funding strategies not identified.  To date, the Town has taken proactive steps totaling $39.1 million of additional discretionary spending strategies to address the current pension and OPEB unfunded obligations. In addition, the pension strategies have anticipated contribution savings of approximately $25.5 million.

As reflected in the table above, the Town Council revised the General Fund Reserve Policy as recommended by the Council Finance Committee.  The updated Policy lays out the procedures for the Town to set aside additional annual discretionary payments (ADPs) to reduce the effective amortization period of the Town’s pension unfunded actuarial liabilities from approximately 30 years to 20 years.

The proposed UAL Funding Policy will ensure that the unfunded actuarial pension liability is reduced over a shorter time period and significant interest savings achieved. Under the updated policy 20-year amortization equivalence will be achieved through additional UAL payments of approximately $400,000 per year.  The total savings associated with the ADP methodology is approximately $13.8 million versus the existing amortization schedules for both plans.

Similar to the pension strategies, the table below illustrates accumulated prefunding and investment gains to date for the prefunding of OPEB obligations.

In addition to the aforementioned strategies, the Town has also taken steps to change benefits or introduce new benefits which provide the Town with ongoing savings. To date these actions have resulted in $290,000 of ongoing annual savings.