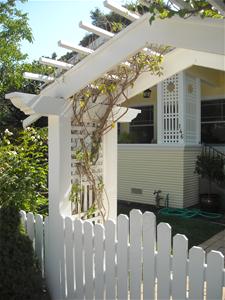 The Almond Grove addition was the first and largest subdivision after the incorporation of the Town of Los Gatos. Of approximately 40 acres, the historic tract was the last land, formerly an almond orchard as its name suggests, of 162½ acres bought in 1865 by John Mason from Edward Auzerais, an important landowner in Santa Clara county after whom Auzerais Street in San Jose and Auzerais Court in Los Gatos was named.

Many important contributors to the development of the town lived in the Almond Grove area. L.E. Hamilton, secretary of the Odd Fellows and director of the 1889 Los Gatos Cemetery Association, built his own house at 139 Wilder (which is still owned and occupied by his daughter). In addition, he also did extensive carpentry Work for Mrs. Winchester of the famous Winchester House in San Jose. The house at 115 Wilder was owned by Clarence Lydon, nephew of town pioneer John Lyndon. E.N. Davis, head trustee (mayor) on the board of trustees, 18980-1902, lived at 131 Tait. The Magnus Tait home is 231 Tait. 129 Tait was the home of E.E. Place and birthplace of George Place, owner of Place Mortuary housed in the Coggeshall Mansion (a Town historic landmark now the site of the Chart House). 328 Bachman is the "Massol" house. Fenilen Massol was Los Gatos mayor, 1894-97. 354 Bachman was the home of George McMurty, who as a youth helped haul stones to build Forbes Mill Annex and later became the first treasurer of incorporated Los Gatos, a post he held for over 40 years. 216 Glen Ridge was the home of W.H.B. Trantham, who in 1885 became the first owner of the Los Gatos News after its founder temporarily retired. Trantham owner the News (later the Mail-News) until 1976. The Mail-News remained in existence until 1953. 200 Glen Ridge was at one time the home of Raymond J. Fisher, educator, after whom Fisher school is named. John Bean started a business right in Almond Grove that evolved into a local family dynasty's multi-national corporation, Food Machinery Corporation. Plagued by San Jose scale on his orchard trees, he developed an improved chemical spray pump, a significant development in an era of tremendous fruit growing in Santa Clara Valley. Bean gave his son-in-law, David C. Crummey, a share in the business. Historical evidence indicated that Crummey lived in the house on the corner of Bean and Santa Cruz Avenues, 212 Bean Avenue, until the business prospered and he built the elaborate mansion at 33 Glen Ridge Avenue. D.C.'s son, John Crummey, further improved the pump and expanded the Almond Grove headquartered business.(In Horatio Algier tradition, he enterprisingly rode a bicycle up and down the Sacramento Valley and lined up enough order to keep the company in business for years.) Under Crummey, the Bean Spray Pump Company became F.M.C. (still retaining a division entitled Bean Spray Pump Company). Under John Crummey's son-in-law, Paul Davies, F.M.C. became an international corporation, and a member of his family still serves on the board of directors. 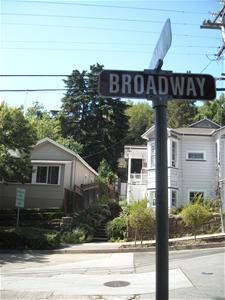 A 100-acre tract of land including what is now the Broadway area was purchased by a Henry D. McCobb in 1863. McCobb planned to subdivide the land into city lots and name the new city Cobbsville.
The land was ultimately sold to ex-Vermonter John W. Lyndon, one of the most well-known in early Los Gatos history, and it was Lyndon who on September 24, 1881, subdivided the area into 48 lots, selling for $125 and up.

On January 5, 1883, Broadway was opened up to access the Lyndon subdivision. Broadway was the first plotted street in Los Gatos. Scattered houses and businesses such as Forbes Mill preceded Broadway, but this subdivision marked the beginnings of a formally laid-out Town. In addition to founding Broadway, John Lyndon, one of the original Town Trustees (equivalent to Town Councilmen), was a stockholder in the new Los Gatos Fruit Packing Co., organized a gas company, started a bank, built a new hotel (Ten Mile House, predecessor to the Lyndon Hotel) and deeded the land for the Southern Pacific Coast Railway depot where the post office now stands. Among the first land purchasers was William L. Lingley, once a sailor from Maine, who bought the Lyndon "Subdivision A" for $600 in gold coin in September, 1881. Part of the original Lingley home still stands near what are now the apartments at 350 W. Main Street. The creek running through that area and #1 Bayview (original location of the Victorian Abbey Inn) is called Lingley Creek. The historic John W. Lyndon home, which later became the Farwell home, was a Victorian mansion at 55 Broadway. John's brother built a stately 2-story residence at the southwest corner of Broadway and S. Santa Cruz Avenue when Boardway was still a dirt road. The cottages built in 1887 for Mr. Thomas Hayselden still stand. Clifton Avenue was once called Hayselden Avenue. Among memorable people who have dwelt on Broadway was Marion Mace Lyndon, second wife of John Lyndon. Her mother was a minor poet and friend of Longfellow. The Mace home still stands on Clifton Avenue. According to neighbors, the present Bruce Berryman residence at 89 Broadway was once rented by writer Jack London's first wife. 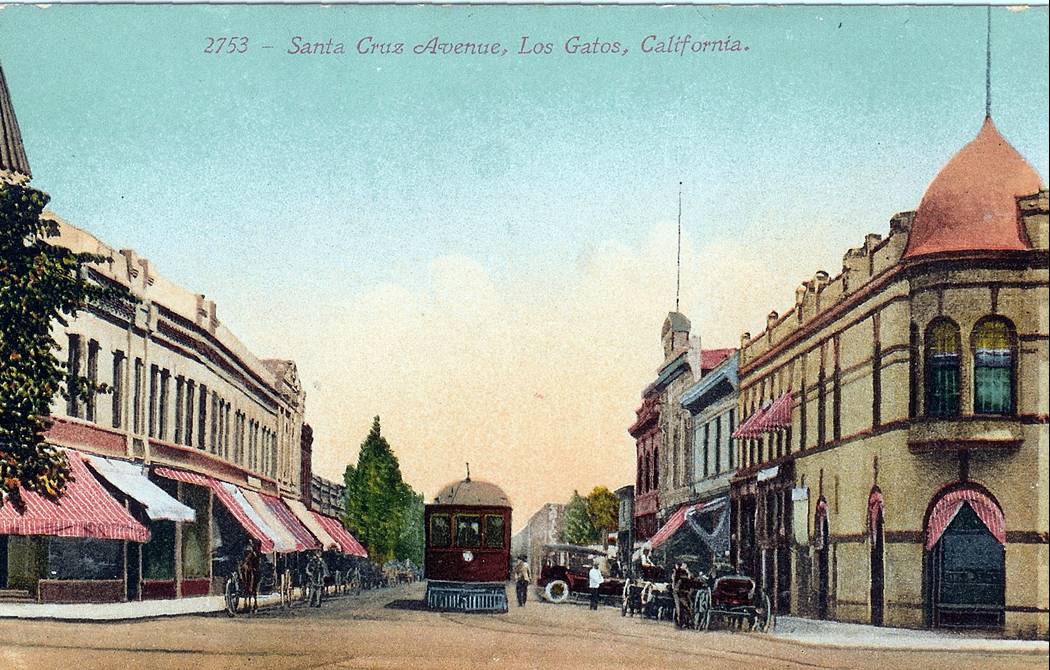 Los Gatos' only surviving concentration of reasonably intact historic commercial buildings, the district includes the Town's earliest commercial intersection and half of the 19th century commercial center. Important businesses, institutions and civic leaders were all located here. A wide variety of architectural styles is represented in the district, including Victorian, Queen Anne, Richardsonian Romanesque, and Mission Revival through most of the intervening modes to Art Deco. All are typical commercial versions of the styles.

It continues to be a lively commercial center, and an important component of the Town. 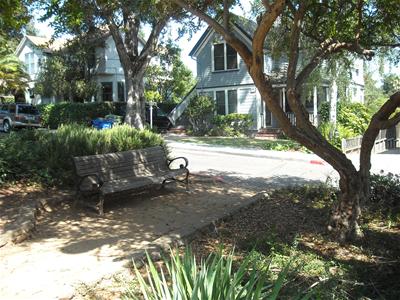 "Fairview Plaza" was the original name given the cul-de-sac termination of Pennsylvania Avenue in the subdivision known as "Fairview Addition", surveyed in June, 1885 by Herrmann Brothers, Land Surveyors, San Jose, California, for Mr. F. H. McCullagh and recorded in county of Santa Clara, Book 5 of Maps, page 26.

"Fairview Plaza" retains the same configuration as originally mapped and contains a landscaped island as a focal point. Approximately three quarters of the homes within the subdivision were built prior to 1900 and retain the character of that era. The pedestrian walk labeled "Turnstile Walk" on the original map remains essentially unchanged and is located at the eastern end of the cul-de-sac.

While originally named "Pennsylvania Avenue," that portion of the street within the "Fairview Addition" subdivision has been renamed Fairview Plaza (from the cul-de-sac west to the intersection with Oak Knoll Road, Manzanita Avenue, and Wadsworth Avenue). Both the street and adjoining houses are popularly referred to as "Fairview Plaza."

"Fairview Plaza" is a rare and unique neighborhood because of the authentic, well-maintained Victorian and Craftsman houses in close proximity with one another. The atmosphere is enhanced because the street is not a "through street," thus allowing a scale and sense of "apparitions" which is not found in most other neighborhoods.